Thank you to all who have renewed your membership for 2021. If you would like to renew but your paper renewal form has gone astray, you can join online here.  Together we can continue to give strong support to the Ashland Library and Jackson County Library Services .

Board Of Directors Election

Thank you to everyone who voted in our recent election. The vote in favor of the whole slate was unanimous. As a result, Pat Fuhrman, Cathy Prazenica, and Karen Spence will each begin another two year term, rejoining Leslie Dawson, Teresa Montgomery, Nancy Quintanilla, Nicky Stanke, and Donna Wright, whose terms continue. Serving with them will be our four new directors. A warm welcome to Karen Clarke, Diane Englehardt, Elaine Hamlin, and Bonnie Johnson.

To promote reading and community discussion, Jackson County Library Services has launched Rogue Reads, a program encouraging everyone to read the same books this winter. The featured author is Jacqueline Woodson. 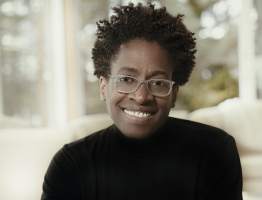 Woodson has written much-honored books for all ages, from picture books to middle-grade and teen fiction, to her first adult novel, Red at the Bone (Riverhead Books, 2019). For all ages, Woodson’s titles explore timely themes such as race and family dynamics.  There are activities and events planned for each age group, culminating in a live virtual talk by Ms. Woodson on Sunday, February 21, 4-5 pm. Click here for more information about Rogue Reads and a calendar of events..The Rogue Reads organizers hope that book clubs and discussion groups will decide to read Red at the Bone in January or February. For example, new Friends of the Ashland Library director Karen Clarke initiated discussions at Mountain Meadows. She reports that both the Mountain Meadows book club and their anti-racism group chose Red at the Bone for their February selections and set a joint meeting in early February to deepen the conversation. The Book Bag books are circulating among the members of both groups. Clarke goes on to say, “Many in Mountain Meadows were familiar with Ms. Woodson’s writing and thrilled to have access to her first adult novel. Well written, and from multiple viewpoints, the novel touches on many salient topics, which are encouraging individual and group discussion. We are looking forward to Ms. Woodson’s presentation in February and are appreciative of JCLS bringing the program to the Rogue Valley.” Click here to request a book bag.